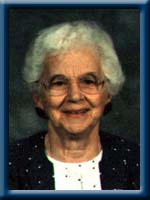 Born in Brooklyn, Wilda was a daughter of the late Willis and Hattie (Clark) Spinks.

Wilda and her late husband Harry raised their children in Brooklyn before moving to Edmonton where Wilda lived for over 50 years and was a former employee of Moore’s Drugs and Woodward’s in the post office outlets. While in Brooklyn, Wilda was a member of the Brooklyn Baptist Church and the Women’s Institute.

She was predeceased by her husband Harry Sylvester,  her infant son Harry Jr., her sister Verta and her brothers Douglas and Bill.

Funeral service will be Saturday, April 13th, 2013 at 11:00 a.m. in Brooklyn United Baptist Church. Reverend Steven Hopper officiating. Burial will take in Seaside Cemetery, Brooklyn following a reception in the church.  Donations may be made to the Canadian Red Cross. Online condolences may be made to www.chandlersfuneral.com

Offer Condolence for the family of Nichols; Wilda Geneva