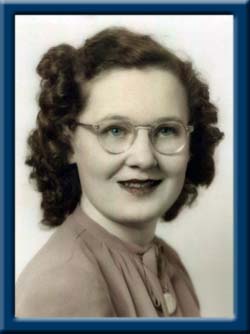 NEWELL-BURGESS; Alice A., 82, of Port Mouton, Queens County, passed away peacefully in Queens General Hospital, Liverpool on Thursday, October 29, 2015.
Born in Port Mouton, she was a daughter of the late William and Inez (Maxwell) Fisher.
Alice worked as an administrative assistant in the fishing industry for most of her working career starting with Nickerson Bros. then with C.W. “Bud” McLeod Fisheries and Clearwater Fisheries. In her late forties, Alice decided she would like to learn about computers, so she took computer courses accordingly. Alice was a true lover of animals always having at least four pets in the house at any given time. In her younger years, Alice loved to entertain others with her guitar playing and her fine, home cooked meals. Sixteen years ago, Alice moved “off the hill” to a house with her husband Beryle with the best view of Port Mouton harbor. She spent many hours in her favorite chair watching the harbor activities.
She is survived by her husband Beryle with whom she has spent 43 years; her daughters Eleanor (Vaughn) Lloyd-West of Liverpool; Nancy (Curtis) Daury of Liverpool; Lynnette (Tom) Kean of Port Mouton; Martha Labour of Port Mouton. Grandchildren Derick (Penny) Lloyd; Natasha Labour (Cory Wamboldt), Nicole Labour (Alex Comeau), Nicholas Labour; great-grandchildren Keigan Lloyd, Riley Lloyd, Neveah Lloyd, Dominic Nelson, Jase Wamboldt. Many nieces and nephews.
She was predeceased by her grandson Shawn Daury; sisters Barbara Lyle and Vivian May and brothers Kenneth Fisher, Billy Fisher, Bruce Smith, Ronald Smith and Laurie Smith.
Cremation has taken place under the direction of Chandlers’ Funeral Home Liverpool. Funeral service will be Tuesday, November 3, 2015 at 11:00 a.m. in Chandlers’ Funeral Chapel, Liverpool. Reception to follow. Family flowers only, donations may be made to the Port Mouton United Baptist Church, the West Queens First Responders or the Queens General Hospital foundation. Online condolences may be made to www.chandlersfuneral.com. Alice’s family would like to thank Dr. Woodford and the staff of Medical floor at Queens General Hospital, Liverpool for their compassionate care.

Offer Condolence for the family of Newell-Burgess; Alice Ardell