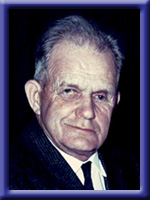 Born in Moose Harbour, he was a son of the late David and Clara (Munroe) Myra.

Jordan was a fisherman in his early years and later a dairy farmer. He often referred to himself as an “Ox jockey”.  He remained very active throughout his later years enjoying gardening and family projects.

He was predeceased by his wife Dorothy (Tarr) his sister Gertie Munroe and his brothers: Walter and George.

Offer Condolence for the family of Myra, Jordan Edward