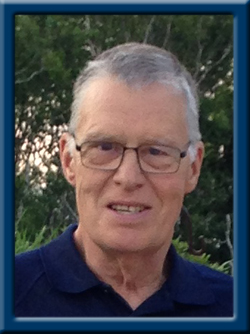 MYERS – H. Ross, 73, of Mersey Point, Queens County, formerly of Mactaquak, NB, passed away peacefully in Queens General Hospital, Liverpool on Monday, September 26, 2016 with his family by his side.
Born, June 10, 1943, in Montreal, PQ., he was a son of the late S. Jack and Agnes (Kinnear) Myers.
Ross attended Acadia University where he played varsity football graduating in 1964. He then enrolled in Dalhousie Medical School graduating in 1969. He began his medical career with a family practice in Fredericton from 1969 to 1976 then went to the University of New Brunswick to serve as the Student Health and Varsity Team doctor from 1976 to 2003. He also served as an emergency room doctor for the Victoria Public Hospital in Fredericton from 1969 to 1976 and the Dr. Everett Chalmers Hospital from 1976 to 1988. He also spent countless hours as an operating room physician at Dr. Everett Chalmers Hospital.
Ross was the Canadian team physician at the Montreal Olympics in 1976, the World University Student games in Buffalo, NY, Czechoslovakia and Sheffield, England, the Commonwealth Games in Edmonton, AB., and the Canadian Summer Games in St. John’s, NL in 1978. He was the team physician for the Fredericton Express and the Fredericton Canadians of the AHL teams. He served as secretary for the Canadian Academy of Sport Medicine from 1972 to 1976 and received the Life Time Medical Award in 2014 from the New Brunswick Medical Society.
Ross had a love of bagpipes and, at the age of 50, along with his daughter Lindsay, began his other career as the “piper man” (as he was well known as around Liverpool and the surrounding area of Queens County). He played in the Fredericton District Pipes and Drums, Base Gagetown Pipes and Drums, Royal Nova Scotia International Tattoo with the Black Watch Association Pipes and Drums, “H” Division RCMP Pipes and Drums, Halifax as well as numerous weddings, funerals, dinners, sporting events, Remembrance Day ceremonies, birthday parties and theatre events.
Ross is survived by his daughter Lindsay (Jason) Glenn of Douglas Harbour, NB; his son David (Sarah) of Black Point, NS; his grandchildren Gillian, Garrett and Gordon Glenn; Molly and Everly Myers. His brother Ken of Toronto, ON.
Ross was predeceased by his loving wife Connie (Monteith).
Cremation has taken place under the direction of Chandlers’ Funeral Home, Liverpool where visitation will be held Thursday evening, September 29, 2016 from 7:00 until 9:00 p.m.. Funeral service will be Friday, September 30, 2016 at 11:00 a.m. from the Liverpool United Baptist Church. Reverend Dr. Steven Hopper officiating. A visitation service will be held on Wednesday, October 5, 2016 from 2 until 4 and from 7 until 9 p.m. in York Funeral Home, Fredericton, NB. with a private family committal taking place at a later date in Kirk Cemetery, North Hampton. Family flowers only, donations may be made to Queens General Hospital Foundation, Queens SPCA, Queens County Branch of the Victorian Order of Nurses, and South Shore Palliative Care Unit. Online condolences may be made to www.chandlersfuneral.com. Special thanks to Dr. Wood, Dr. Woodford, Dr. Abriel and the nursing staff of Queens General Hospital for their compassionate care.

Offer Condolence for the family of Myers; H. Ross