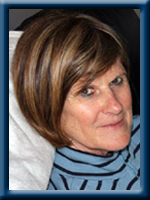 MYERS – Constance L., 64, of Mersey Point, Queens County, passed away peacefully in Queens General Hospital, Liverpool with her family by her side.

Born July 8, 1950 in Woodstock, NB, she was a daughter of the late Harrison and Nina (Cook) Monteith.

Connie graduated from the Victoria Public Hospital, Fredericton in 1971 as an R.N. She worked alongside her soon to be husband Dr. Ross Myers in his office until 1976 when they were married. She then moved on to the Dr. Everett Chalmers Hospital in Fredericton where she worked in various units including the DVA Unit until 2006 when she retired. Connie was a very dedicated, compassionate and hardworking RN and set an example for many nursing students. She and her husband Ross moved from Mactaquac, NB to Mersey Point where they fulfilled their life long dream of building a home on the ocean. Everlasting friendships were quickly made and she was grateful and loved her large circle of friends who helped and encouraged her during her recurrent battle with metastatic breast cancer. Although a breast cancer survivor for twelve years, it had returned and Connie spent the last two and three quarter years courageously fighting with regular chemotherapy treatments. She especially enjoyed the Touch Therapy and Reiki sessions with Karen, Suzanne and Jeannie as well as the support of other friends who provided meals and comforting words during her difficult times. Connie took great pride in her family especially her children and grandchildren and will be lovingly remembered as always worrying about them and not herself. She will be greatly missed by her family and by all who knew her including her buddy “Manning” who enjoyed their daily walks at Beach Meadows Beach.

She was predeceased by her sister Pauline Belyea and brother Roger.

Visitation will be Thursday, October 16, 2014 from 7 until 9 p.m., with prayers being at 8:00 p.m., in Chandlers’ Funeral Home, Liverpool. Reverend Dr. Steve Hopper officiating. A memorial service will be held Thursday, October 23, 2014 at 2:00 p.m. in Grace Memorial Baptist Church, Fredericton, NB. Family flowers only, donations may be made to the Queens S.P.C.A., the Victorian Order of Nurses, Queens Branch, the Queens General Hospital Foundation or to a charity of your choice. Online condolences may be made to www.chandlersfuneral.com

Offer Condolence for the family of Myers; Constance “Connie” Louise