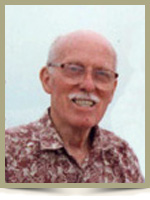 He was the son of Horace Eugene and Ryllis Munhall of Cleveland, Ohio and Long Island, N.Y. where he grew up.

Bob was educated at Port Washington High School, The Art Students League of New York and, under the G.I. Bill, Columbia University.  In 1944 he met and married Mary, his warbride, in North Devon, England.  While serving as a 1st Lieut. in the 107th Ordnance Company, US Army, he was involved in the waterproofing of vehicles in preparation for the D-Day landing in France, during WW2.  In recognition of his service at the Battle of the Bulge he was the recipient of a Presidential Unit Citation.  Upon the end of hostilities Bob was one of several US Army officers selected to serve as “interim Mayors” of recently occupied German cities.  In that capacity at Reichenbach on the Czech border he maintained order and administered the distribution of supplies.  Following demobilization in 1945 Bob returned to the advertising business as a graphics artist, spending much of his working life at McCann-Erickson Inc. in NYC, but in 1963 setting up his own studio.   In 1993 Bob and Mary emigrated to Canada and settled in Mill Village, Queens County, where they spent 17 happy and contented years, surrounded by the beauty of woods, water and wildlife.

Bob is survived by his wife Mary, his sons Robert and Michael, his grandsons Trevor and Matthew, and his sister Martha Benzle.  Deeply missing him is his devoted Beardie, Rosie Dog.

At Bob’s request there will be no service, and in accordance with his wishes his ashes will be scattered. For those wishing to do so, a donation in his name may be made to the Queens County Museum, 107 Main Street, Liverpool NS B0T 1K0, or to the SPCA Queens County Branch, PO Box, 2102 Liverpool NS B0T 1K0, with the sincere appreciation of the family. Online condolences to the family may be made at www.chandlersfuneral.com

Offer Condolence for the family of MUNHALL; Robert Leach “Bob”