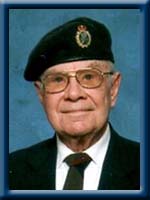 Born in Halifax, he was a son of the late Michael and Mary (Bonang) Mullins.

John served with the Royal Canadian Army Dental Corps, was a veteran of World War II, serving in the Italian Campaign and the Liberation of Holland. He loved life in the military and was a career serviceman of 30 years when he was honorably discharged. His last posting was as the Dental Supply Officer for Maritime Command. He worked as a salesman for Maritime Dental for a number of years and later started his own company, Mullins Office Supplies, in Wilmot, NS.  He, and his wife Betty, enjoyed traveling to Bradenton, Florida to their winter retreat where they had many snowbird friends and hosted the Annual Mullins Invitational Golf Tournament each year. John was an avid golfer and fisherman and was a member of Ashburn Golf Course in Halifax and Hyland Golf Club in Ottawa for many years. He also enjoyed hunting with his Springer Spaniel, Toby, although Toby was much better at flushing the birds than John was at shooting them.

He is survived by his daughter Susan of Liverpool; his grandson Daniel Blundon of Ottawa and his nephew Edgar Kauffmann of Baldwin, MD.

He was predeceased by his beloved wife of 55 years in 2003, M. Elizabeth “Betty”, with whom he had “the love affair of the century” ; his sister Marion (Kauffmann) Stryker and his brother Clarence “Ted”.

Cremation has taken place under the direction of Chandlers’ Funeral Home, Liverpool. Burial will be Wednesday, January 16th, 2013 at 11:00 a.m. in the National Military Cemetery (Beechwood), Ottawa. Donations may be made to any charity in John’s memory. Online condolences may be made to www.chandlersfuneral.com

Offer Condolence for the family of Mullins; John Francis