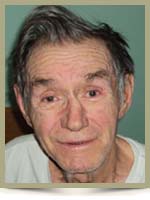 Muise – Stanley, 79, passed away peacefully at North Queens Nursing Home on Friday, May 11th, 2012.  Stanley came to live with us at North Queens Nursing Home (NQNH) in 2010.  Although we didn’t know Stan before he came to us, we did get a chance to know him during his time with us.  Stan was a gentleman and was a delight to sit down and have a conversation with.  He often spoke of being a cook in a logging camp.  He said there were many men to feed and no one ever walked away hungry.  He not only worked in Nova Scotia but in many other places, including Northern Ontario.  Stan was a very hard working man and took pride in everything he did and it showed in our conversations.   Cremation was entrusted to Chandlers’ Funeral Home, Liverpool. A graveside memorial service was held in St. Gregory’s Catholic Cemetery on May 18th, 2012 at 2:00 p.m. with Father Brian Murphy officiating. NQNH is having a memorial service at 2:00 p.m. , June 6th, 2012 honoring  Stan’s life as well as the lives of other residents and staff members who have passed away this year.

Offer Condolence for the family of Muise; Stanley Arthur