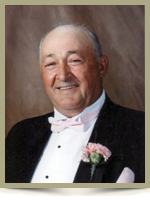 Muise, Elie Jeremie “Jerry”, 87, of Hunts Point, Queens County, passed away peacefully on Thursday, June 19th, 2014, in the South Shore Regional Hospital, Bridgewater, surrounded by his loving family.  Born in Meteghan Station, he was a son of the late John and Rose (Deveau) Muise.  Jerry first worked in the woods, at lumber camps and for the Markland Shipping Co., before going to work for the Bowater Mersey Paper Mill in 1956. While there he worked in the groundwood department, the railroad, as a heavy equipment operator and he was the yard foreman before retiring in 1989. For several years he was a shop steward for the union, CPU Local 141. He always enjoyed a good union ‘discussion”. He was a former trustee of the Port Mouton Consolidated School for many years and a member of the Hunts Point and Area Athletic Association. Jerry enjoyed music, playing the guitar, dancing with Pearl, hunting, fishing and he was well known for his rappie pie.  He is survived by his loving wife of 67 years, Pearl; daughters, Beverly (Sandy, deceased) Mossman, of Liverpool, Irene (John) Richardson, of Hunts Point; sons Brian (Yvonne McNamara), of Liverpool, Kevin (Sherry), of Hunts Point, Dale (Sandra), of Milton; nine grandchildren; eight great-grandchildren; sister Muriel Saulnier and Helen Gaudet.  He was predeceased by grandson Jarrett; sisters, Marjorie Clive, Mary Thibeault; brothers Frank and Ned.  Cremation has taken place under the direction of Chandlers’ Funeral Home, Liverpool. Visitation will be held on Sunday, June 22nd, 2014, from 7-9 p.m. and a celebration of Jerry’s life will be held on Monday, June 23rd, 2014, at 2:00 p.m., both from Chandlers’ Funeral Home, Liverpool. Reverend Judy Cross officiating. Burial will be in Oceanside Community Cemetery, Hunts Point. Family flowers only. Donations may be made to the Alzheimer Society of Nova Scotia or to a charity of your choice. Online condolences to the family may be made at www.chandlersfuneral.com

Offer Condolence for the family of Muise, Elie Jeremie “Jerry”