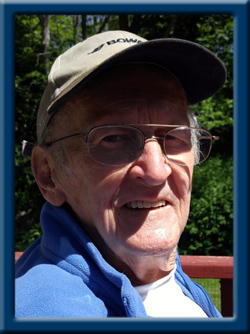 MOUZAR – Walter Theodore, 85, of Brooklyn, Queens County, passed away peacefully in Queens General Hospital, Liverpool on Wednesday, November 30, 2016 with his wife, Hazel, by his side.
Born in Beach Meadows; Queens County, Walter was a son of the late Gilbert and Effie (Mouzar) Mouzar.
Walter was Personnel Superintendent for Bowater Mersey Paper Company Limited for 39 years until his retirement. He was a member of Pilgrim United Church.
He is survived by his wife of 60 years Hazel (Fralic); his daughters Janice Dore of Dartmouth; Julie Mouzar of Calgary and his son Jeffrey (Sylvia) of Fredericton. His grandchildren Kyle and Genevieve Dore; Kelcey and Nicholas Mouzar and Luka Campeau.
Walter was predeceased by his brother Victor.
Cremation has taken place under the direction of Chandlers’ Funeral Home, Liverpool. At Walter’s request, there will be no funeral service. No flowers. Donations may be made to Heart and Stroke Foundation of Nova Scotia or to Queens General Hospital Foundation. Online condolences may be made to www.chandlersfuneral.com

Offer Condolence for the family of Mouzar; Walter Theodore