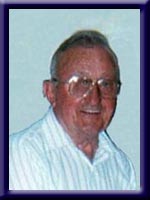 Mouzar – Victor Gilbert,  83, of Brooklyn, Queens County, passed away peacefully in Queens General Hospital on March 12th, 2010, with his family by his side.

Born in Beach Meadows, he was the oldest son of the late Gilbert and Effie Mouzar.

Vic lived all his life in Brooklyn.He worked alongside his wife Bea, as owner-operator of Mouzar’s General Store. They kept the business for 43 years until retirement in 1988. His years of serving the community gave him many years of keeping in touch with people and friends.

Upon retirement, Vic’s passion was woodworking and spending time at his cabin chopping wood. Every spring, he always showed a labour of love when planting his vegetable garden and pruning his famous ’rhodo” bushes. In earlier years he was a Brooklyn Schooners Softball team fan traveling to nearby provinces, to watch son Gary, play in championships. He loved the outdoors! Vic was a dedicated Toronto Blue Jays  fan. In his later years he made several trips to British Columbia to visit with family.

Cremation has taken place under the direction of Chandlers’ Funeral Home, Liverpool. A Graveside Memorial Service will be held Wednesday, March 17th, 2010, at 2:00 p.m., in Seaside Community Cemetery, Brooklyn. Lay Minister Peter Anthony officiating. Family flowers only. Donations may be made to a charity of your choice. Online condolences may be made to www.chandlersfuneral.com.

Offer Condolence for the family of Mouzar, Victor Gilbert