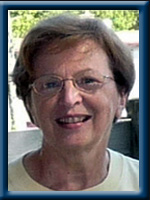 MOUZAR – Mary Aileen, 68, of Hunt’s Point, Queens County, formerly of Liverpool and Halifax died at Queens General Hospital, Liverpool on Friday, September 30th, 2011 as a result of gall bladder cancer.
Born in Brooklyn, Queens County, she was the younger daughter of the late George and Mabel (Frelick) Henderson.
A former writer/editor for the Halifax Herald Limited, she later designed and wrote knitting pattern instructions for White Buffalo Mills Limited and co-authored three cook books. After retiring to Hunt’s Point, she published Queens County Times, a popular community online source of news and information for 10 years.
She is survived by three brothers: Donald (Rosalyn) Henderson, Howard (Joan) Henderson and Ronald (Bonnie) Henderson, all of Brooklyn. A sister Phyllis (Murray) Smith of Hunt’s Point and many nieces and nephews.
She was predeceased by her husband of 41 years, Barry, in 2009.
At Mary’s request, there will be no funeral service. A private family burial will be held in Zion United Church Cemetery, College Street at a later date following cremation. No flowers, donations may be made to the Queens County branch of the S.P.C.A. or to Queens General Hospital Foundation. Online condolences may be made to www.chandlersfuneral.com

Offer Condolence for the family of Mouzar; Mary Aileen