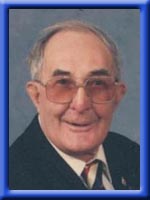 Born in Brookfield Mines he was a son of the late James and Hannah (Fancy) Mosher.

Lester joined the armed service in 1939 and served overseas with the West Nova Scotia Regiment in Sicily, Italy, and England during the Second World War. Following the war he worked in the woods for Bowater Mersey Paper Company and the gold mines in Queens County. Later he worked at Keji Park first as a laborer and then as a security guard. Lester enjoyed the outdoors, gardening, hunting, camping and fishing. He loved to travel and he loved people, especially his family. He was a member of  # 87 Royal Canadian Legion A.L. Patterson Branch, Caledonia and the West Nova Scotia Regiment Memory Club.

He was predeceased by his sisters Laureen Hirtle and Bessie Ettinger and brother Walter.

Cremation has taken place under the direction of Chandlers’ Funeral Home, Liverpool. A graveside service will be held May 14th, 2010 at 2:00 p.m. at the South Brookfield Community Cemetery, Reverend Lloyd Gillieo officiating. No flowers by request. Donations may be made to the South Brookfield Baptist Church. Online condolences may be made at www.chandlersfuneral.com.

Offer Condolence for the family of Mosher; Lester Randolph