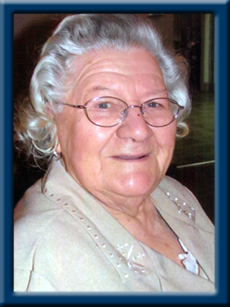 MOSHER – Jane “Jean” Malcolm, 100, of South Brookfield, Queens County, passed away peacefully in Queens General Hospital, Liverpool on October 9, 2021. Jean went over the white cliffs of Dover to be with her beloved Lester.
Born in Leith, Edinburgh, Scotland, Jean was a daughter of the late William and Maggie (Chard) Beveridge.
Jean was a factory worker during World War II. During this time, she met her future husband, Lester, and later married in England. Jean then immigrated to Canada where she and Lester took up residence in South Brookfield. Jean worked several jobs in North Queens. She was employed and later owned the general store, worked at North Queens Nursing Home, worked for Parks Canada and as a school janitor for a time. She also was coordinator of Home Care for Department of Community Services retiring at the age of 72, not because she wanted to, though. Computers had come into the work force and she simply didn’t want to learn how to use them! She enjoyed playing darts, baking cakes, crocheting and knitting. Her passion was watching curling on television. Jean will be lovingly remembered as our corner post, our mentor, our shoulder to cry on and our support when things weren’t going as they should.
Jean is survived by her daughter Lorna Cole and her son Bill (Mona), both of South Brookfield. Her grandchildren Patrick Cole and Robert (Adele) Cole, Chris (Jacklyn) Mosher and Tara Mosher (Ryan Bartlett); her great grandchildren Morgan (Meghan Crouse) and Jaden Cole and Ashton and Austyn Mosher. Best and faithful friend and fellow war bride Betty Lovett of Port LaTour.
Besides her parents, Jean was predeceased by her husband of 67 years, Lester. Her sisters Molly, Brenda and infant Joan and her brothers Robert, James and Roy and her son in law John Cole.
Cremation has taken place under the direction of Chandlers’ Funeral Home, Liverpool. A graveside memorial service will be held Saturday, October 23, 2021 at 11:00 a.m. in South Brookfield Community Cemetery. Pastor Royce Getson officiating. Family flowers only, donations may be made to the South Brookfield Baptist Church. Online condolences may be made to www.chandlersfuneral.com

The family would like to thank the doctors and staff at Queens General Hospital, VON and Queens Home Support. A special thank you to Queens Transit for taking mom for ice cream on her 100th birthday and to Bonnie Joudrey for her help, allowing Mom to stay in her own home.

Offer Condolence for the family of Mosher; Jane “Jean” Malcolm