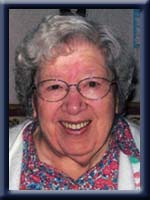 Born in Bridgewater, she was a daughter of the late John and  Beatrice (Hubley) Labrador.

Doris was very active in her community providing Meals on Wheels and was a member of the Liverpool Seniors Group as well as Trinity Anglican Church. She was also a member of the A.C.W. She enjoyed crafting such as painting, quilting, crocheting and sewing and sewed for a time for Suttles and Seawinds.

Visitation will be Tuesday, April 17th, 2012 from 7 until 9 p.m. in Chandlers’ Funeral Home, Liverpool. Funeral service will be held Wednesday, April 18th, 2012 at 2:00 p.m. from Trinity Anglican Church, Liverpool.  Chaplain Donald Lawton officiating. Burial will be in St. James Anglican Cemetery, Hunt’s Point. Family flowers only, donations may be made to Trinity Anglican Church. Online condolences may be made to www.chandlersfuneral.com

Offer Condolence for the family of Mosher; Doris May