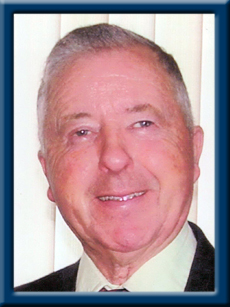 Morton – James Lawrence, 86, of Liverpool, passed away peacefully in Queens Manor on Friday, March 22, 2019.
Born in Liverpool, James was the oldest son of the late James R. and Elsie M. (Peach) Morton.
James had many careers and was owner operator of many enterprises throughout his lifetime. As a teenager, he worked in the woods with his father and on the Liverpool waterfront unloading boats and in the fish plants. He, then, worked for the Liverpool Advance for twenty years learning the printing trade from the ground up. It was at the Advance that he became interested in photography. He opened his own studio on Main Street which he ran for many years.
His next venture was to buy and operate a poultry farm in Brooklyn where he had a contract with Canada Packers for 60,000 birds a year. He also raised beef cattle and 2,000 turkeys on this property.
Always thirsting for knowledge, James studied and acquired his pilot’s license becoming the first monocular private pilot with night endorsement in Nova Scotia. But with ink in his blood, he opened a print shop called Master Printers which he eventually sold to two Veinot brothers and friends from the Advance. This business is still known as Veinot’s Print.
He moved on to building supplies and owned Morton Building Supplies and West Nova Lumber for ten plus years. Never one to be idle, he moved to First beach hill and started experimenting with apple trees which became Morton’s Apple Acres with 2500 fruit trees qualifying him to be classed as a commercial apple grower.
But needing the ink, he opened another print shop on the farm property called Morton’s Printing and Publishing producing many books for local authors.
In his later years, he picked up his guitar again and played in many variety shows around the province. He gave song writing a shot and would sing some of his work. A personal favorite was one written for his wife called “My Apple Queen”. He played for his customers while selling apples from his big red truck and became known as the “Singing Apple Man” which gave him much joy.
James is survived by his devoted wife of 64 years Elsie (Dagley), his daughters Vickie (Brian) Dexter of Brooklyn, Cindy (Steve) Mansley of Yellowknife and his son James (Angela) of Liverpool. His grandchildren Amanda (Chris) Hernandez of Coldbrook; David Dexter of Brooklyn. Great grandson Benjamin Hernandez. His step grandchildren Stephen Mansley (Danielle Flemming) of Riverview, NB, Sara Mansley (Jason Hicks) of Dieppe, NB, Krista Mansley of Bridgewater. Step great grandchildren Willow Mansley and Hayla, Kiaya and Archer Stewart. His sister Marie Langille of Liverpool and his brother Ralph (Shirley) Morton of Liverpool. Special foster sisters Alice (Mervin) Buchanan of Lockeport and Carolyn Dauphinee of Halifax. Many nieces and nephews that meant a lot to James.
James was predeceased by his sister Clara Dorey and his brother Douglas.
Cremation has taken place under the direction of Chandlers’ Funeral Home, Liverpool, NS. Funeral service will be Thursday, March 28, 2019 at 2:00 p.m. in Trinity Anglican Church, Liverpool. Reverend Cherry workman officiating. Burial will be in Trinity Anglican Cemetery, Bog Road, Liverpool. No flowers by request. Donations may be made to a charity of your choice. Online condolences may be made to www.chandlersfuneral.com. The family would like to thank the Home Care staff, Queens General Hospital Staff and the staff of Queens Manor for all their support as well as Dr. Garry Morash and Dr. Gary Ernest for their care. James’ family will never pass an apple tree without thinking of their beloved “Singing Apple Man”.

Offer Condolence for the family of Morton; James Lawrence