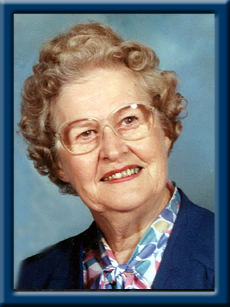 Dorothy was born in Shelburne, NS on April 8, 1920. She attended Shelburne High School and graduated first in her class. Throughout her youth she sang in the church choir, enjoyed playing tennis and softball, riding her bike, and sailing in the Shelburne Harbour. She loved to dance and she met her future husband at a local naval base dance in Shelburne during WWII. Prior to her marriage to Lefty Morrison she was employed at Cox’s General Store.

Dorothy was a happy loving mother, maintaining a positive attitude to the very end. She and Lefty raised their 3 sons in Liverpool, Queens County and they were her pride and joy. She was an avid gardener, a great baker and cook, and enjoyed knitting. Dottie was a member of the Zion United Church, the Liverpool Curling Club and a local bridge club. She enjoyed family time at their two cottages in Parrsboro and Greenfield, NS. Dorothy will be sorely missed by her loving family and friends. We would like to thank Dr. Andrew Blackadar, her homecare workers Belinda Delong and Susan Fisher, and the caring staff at Queens Manor, Liverpool, NS.

Offer Condolence for the family of Morrison; Dorothy Blanche