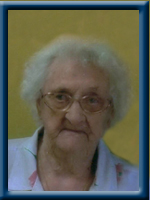 Born in Greenfield, she was a daughter of the late Charles and Annie (Aulenback) Freeman.

Hilda was a member of the Highway Pentecostal Assembly in Sandy Cove. She loved to read and listen to music.

She is survived by her daughter Florence (Patrick) Parnell of Mill Village. Son Randall of Liverpool. 10 grandchildren and 14 great grandchildren. Her brothers Lee of Ontario and Foreman of Dartmouth.

Visitation will be Monday, January 2nd, 2012 from 7 until 9 p.m. in Chandlers’ Funeral Home, Liverpool. Funeral service will be Tuesday, January 3rd, 2012 at 11:00 a.m. in Highway Pentecostal Assembly, Sandy Cove. Reverend Fred Carr officiating. Burial will be in Mill Village Community Cemetery. Family flowers only, donations may be made to Highway Pentecostal Assembly, Sandy Cove or to Queens Manor, Liverpool. Online condolences may be made to www.chandlersfuneral.com

Offer Condolence for the family of Moreau; Hilda Marie