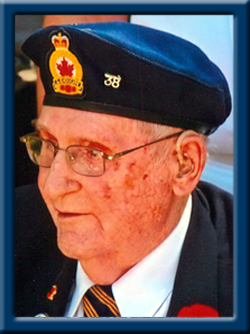 MOODY – Harold Samuel, 96, of Cornwallis Park, formerly of Hunts Point, Queens County, passed away Friday, August 28, 2015 at the Annapolis Royal Nursing Home where he received excellent care.
Born in EbbwVale, South Wales, he was a son of the late Ernest and Hannah (Plaster) Moody.
Harold joined the Royal Canadian Navy in 1937 and served on many ships until retirement in 1962 as CPO. He was then employed at K&W bookbinding and Liverpool District Schools. Harold enjoyed his navy life as well as spending time with his family. He was a Life Member of Mersey Branch #38, Royal Canadian Legion, Liverpool and Chief and PO’s Association, and a friend to all who knew him.
He will be missed by his son Lawrence (Donna); grandchildren Lori Moody (Greg Durling), Vicky Bennett (Keith), Mark Moody (Rochelle); great grandsons Justin Robicheau (Terri), Blake Robicheau, Devon, Daniel and Adam Bennett, Justin Daley (Ashley) and Caleb Moody. One great great grandson, Casey Robicheau.
He was predeceased by his wife Margaret (Verge) and brother Ernest.
Cremation has taken place under the direction of Chandlers’ Funeral Home, Liverpool. Funeral service will be held Wednesday, September 2, 2015 at 1:00 p.m. in Chandlers’ Funeral Chapel, Liverpool with reception to follow. Burial will be at a later date. No flowers by request, donations may be made to St. James Anglican Church, Hunts Point or to a charity of your choice. Online condolences may be made to www.chandlersfuneral.com

Offer Condolence for the family of Moody; Harold Samuel