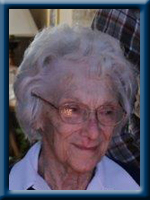 MITTON – Kathleen M., 96, of Brooklyn, Queens County, passed away peacefully in Queens General Hospital, Liverpool on Saturday, August 16, 2014.
Born in Brooklyn, she was a daughter of the late Eldridge and Nina (Fralic) Jennings.
Kathleen worked at the former Eatons Canada Outlet in Liverpool for many years. She attended Pilgrim United Church and was an avid knitter and crotchetier.
She is survived by her son James (Beulah) of Brooklyn; grandchildren Reid (Elizabeth) of Brooklyn, Kirk (Ann) of Brooklyn and Kelli (Paul) Gillis, of Halifax; great-grandchildren Josh, Jody, Sarah, Noah and Marah.
She was predeceased by her husband Medley “Fred” Mitton and her sisters Hilda Beck and Thelma Jennings.
Cremation has taken place under the direction of Chandlers’ Funeral Home, Liverpool. A graveside memorial service will be held Thursday, August 21, 2014 at 11:00 a.m. in Seaside Cemetery, Brooklyn. Lay Minister Peter Anthony officiating. No flowers by request, donations may be made to any charity. Online condolences may be made to www.chandlersfuneral.com.

Offer Condolence for the family of Mitton; Kathleen Mae