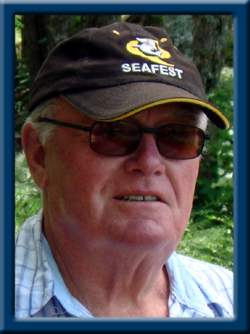 MITTON – James Frederick, 76, of Brooklyn, Queens County, passed away peacefully at home on Monday, January 11, 2016.
Born in Brooklyn, he was the son of the late Medley and Kathleen (Jennings) Mitton.
Jim was a rigger for Bowater Mersey Paper Company for over 35 years. He enjoyed playing and watching sports especially playing and coaching hockey, playing fastball, hunting and listening to country music.
He is survived by his wife Beulah (Warner); his daughter Kelli (Paul) Gillis of Halifax; his sons Reid (Elizabeth) and Kirk (Ann), both of Brooklyn; grandchildren Josh, Jody, Sarah, Noah and Marah.
Cremation has taken place under the direction of Chandlers’ Funeral Home, Liverpool where funeral service will be Friday, January 15, 2016 at 11:00 a.m. Reverend Dr. Steven Hopper officiating. Burial will be at a later date. Family flowers only, donations may be made to SHAID Animal Shelter or to the Brooklyn United Baptist Church. Online condolences may be made to www.chandlersfuneral.com

Offer Condolence for the family of Mitton; James Frederick