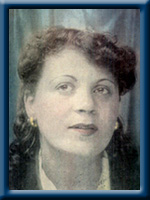 MITCHELL – Edna B., 98, of Liverpool, passed away peacefully in Queens Manor, Liverpool on Thursday, September 8th, 2011.
Born in Liverpool, she was a daughter of the late Harry and Ann (Lawrence) Warrington.
Edna worked in the former Civic Hospital in Halifax as a sterilizer for a number of years. She enjoyed bowling and bingo.
She is survived by her daughters June (John) Elwin of Dominica, Jamaica and Joan Prevost of Montreal, PQ. Sons Edwin “Dude” Young of Liverpool and Ward (Jill) Young of London, ON. 14 grandchildren, 27 great-grandchildren and 8 great-great-grandchildren. Sisters Genora Power of Dartmouth and Geneva Tupper of Abbottsford, BC.
She was predeceased by her first husband Donald Young, her companion William Power, her daughter Donalda Willis, her grandson Kevin Young, sister Marjorie Christmas and brothers Vincent, Freeland, Eugene, Murray, Mervin and Reginald.
Cremation has taken place under the direction of Chandlers’ Funeral Home, Liverpool where funeral service will be held Tuesday, September 13th, 2011 at 11:00 a.m. Reverend Judy Cross officiating. Burial will be in Trinity Anglican Cemetery. Family flowers only, donations may be made to any charity. Online condolences may be made to www.chandlersfuneral.com

Offer Condolence for the family of Mitchell; Edna Blanche