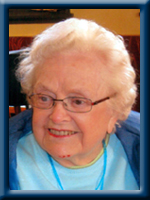 Born in Liverpool, she was a daughter of the late Andrew and Margaret (Ryer) Norman.

Betty was a member of the Business and Professional Women’s Club, a life member of the I.O.D.E. and the UCW. She enjoyed bridge and travelling with her late husband Alan.

She is survived by her sister Myra (A.V. “Bert”) Wiles of Liverpool, stepdaughter Patricia of Caledonia and stepson Richard of Ottawa, sister-in-law Sue Norman of Liverpool and brother-in-law William Mulhall of Hantsport.

Funeral service will be held on Wednesday, January 29th, 2014, at 11:00 a.m., from Chandlers’ Funeral Chapel, Liverpool. Reverend Sheila Redden-Smith officiating. Burial will be in the Zion United Church Cemetery, College Street, Liverpool. Family flowers only. Donations may be made to Queens Manor,  Queens General Hospital Foundation or to charity of your choice. Online condolences may be made to the family at www.chandlersfuneral.com

Offer Condolence for the family of Minard; Cora Elizabeth “Betty”