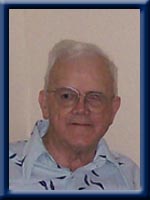 Born on April 22, 1928 in Niagara Falls, ON, he was a son of the late Raymond and Marie (Alexandria) Metzger.

Richard was a former merchant marine serving aboard the Gypsum Queen. He was a former employee of Nova Scotia Power, Bowater Mersey Paper Company and spent 14 years with Atlantic Bookbinding in Liverpool. He was an active volunteer with the Queens County CB club working on Crime Prevention Breakfasts and with EMO. He was also a member of the Canoe and Camera Club in Milton.

He is survived by a daughter Sharon Slauenwhite of Bridgewater. Sons: Richard (Noelle) of Western head and Philip (Laura) of Halifax. Sisters: Doris Kaulback of Liverpool and Dot Budd of Massachusetts.

He was predeceased by his wife Gloria “June” (Manthorne).

Offer Condolence for the family of Metzger, Richard Raymond