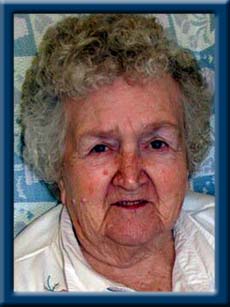 MERRY – Nina Lee, 91, formerly of Maitland Bridge, Annapolis County, passed away Monday, May 22, 2017 in North Queens Nursing Home, Caledonia, NS. where she resided since 2011.
Nina was born August 17, 1925 in Rosette (Westfield), Queens County to the late Leigh and Carrie (Mansfield) Weare.
In 1943, she and her late husband Charles were married. They spent 59 years together until his death in 2002. She was employed at the former Kedje Restaurant in the early 1970’s as a cook and many years with the Department of Fisheries and Oceans tagging salmon. She was a wonderful cook and could make the best “spoon brown bread”. She had several hobbies in the last years which she had time to do after her hardworking days were over. She loved bingo, Find-A-Word puzzles, Frustration, scratch tickets and knitting. She was the last surviving member of her immediate family.
She is survived by her children Judy (Chester) Orde of South Milford, Heather (Charlie) Hearn of Westfield, Garnet (Judy) of Maitland Bridge, Annette Baker of Bridgetown, Margaret Merry (Laurie Ford) of Maitland Bridge, Janet (Frank) Smith of Wileville, Stanley of Middlefield, Roberta (Edward) Uhlman of Pleasant River, Barbara (Kendall) Selig of East Clifford, Gary (Gert Whynot) of Wileville. 17 grandchildren, 22 great grandchildren and 4 great, great grandchildren.
She was predeceased by her husband Charles, her son Wade, daughter in law Theresa, son in law Jimmy Baker, sisters Alma Weare, Arvilla Charlton, Evangeline Merry and Florella Corkum; her brothers Phineas, Leighton, Theodore, Lionel and Roderick.
Visitation will be Friday, May 26, 2017 from 1:00 until 2:00 p.m. Followed by a funeral service at 2:00 p.m. all at St. Paul’s United Church, Maitland Bridge. Cremation to follow service with a private family interment at a later date in Maplewood Cemetery, Maitland Bridge. Family flowers only, donations may be made to North Queens Nursing Home, Caledonia. Online condolences may be made to www.chandlersfuneral.com
Special thanks to everyone at North Queens Nursing Home for the care, love and fun times you gave Mom. She had a special spot in her heart for Melanie, Julie-Ann, Alisha and Doris. “A mother is she who can take the place of others but whose place no one else can take.”

Offer Condolence for the family of Merry; Nina Lee