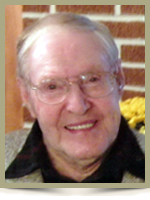 A veteran of World War II, he was a gunner in the 88th Light Artillery, Royal Canadian Army. He graduated from the Nova Scotia Land Survey Institute following his military service and was a long time employee of Bowater Mersey Paper Company where he worked as a land surveyor in the Woodlands Department. He was an avid reader, gardener and nature lover who had an enduring passion for music and singing. Throughout his life, he was active in various sports. He was a past member of the Liverpool Curling Club, Royal Canadian Legion, Branch #38 and the Mill Village Volunteer Fire Department. Rod also served on numerous local committees and groups over the years.

In addition to his parents, he is predeceased by his wife of sixty-one years, Estella (Newell), sisters Sandra (Seamone), Muriel (DesRosiers), Madge (MacKinnon) and Merlene Melanson. Brothers Robert, Russell, Rex and Royce.

Offer Condolence for the family of Melanson; Roger Frederick