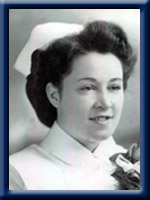 MELANSON – Estella Flotilla, 84, of Mill Village, Queens County, passed away peacefully in Queens General Hospital, Liverpool on November 30th, 2011.
Born in Newellton, Cape Sable Island, she was a daughter of the late Stillman and Bertha (Penney) Newell.
Estella trained as a maternity nurse at the former Grace Maternity Hospital, Halifax. She worked a short time at Roseway Hospital, Shelburne before becoming plant nurse at Bowater Mersey Paper Company for fifteen years until her retirement. Her first love was her family.
Surviving besides her loving husband of 61 years, Roger Frederick, are her children Gayle (David ) Doncaster of St. Andrews, NB, Robert (Mary Ann) of Yellowknife, NWT., Anne (Terry) Murphy of Corinth, Vermont, Alex (Joy) of Mill Village. A wonderful grandmother to Robin (Elizabeth), Kristen (Kenny), Megan, Kiley (Dylan), Ryan, Connor, Jennifer, Lindsay and Thomas. A great-grandmother to William, Simon, Hannah, Riley and Ayden. Her sisters Lydia Holmes of Cambridge, ON., Geraldine Symonds of Newellton, Yvonne (Norman) Nickerson of Barrington.
She was predeceased by her sisters Nellie MacKinnon and Lena Symonds and her brothers Preston, Elroy and Clayton.
Cremation has taken place under the direction of Chandlers’ Funeral Home, Liverpool where a funeral service will be held Monday, December 5th, 2011 at 11:00 a.m. Lay Minister Peter Anthony officiating. A private family committal will take place in Mill Village Community Cemetery following a reception in the funeral home. Family flowers only, donations may be made to Bethany United Church, Mill Village or the Salvation Army. Online condolences may be made to www.chandlersfuneral.com

Offer Condolence for the family of Melanson; Estella Flotilla