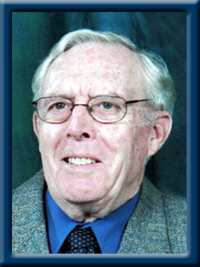 Meisner, Charles “Arnold “, Age 88, of Liverpool, passed away peacefully June 3, 2015 at Colchester East Hants Hospital.  On this day, Arnold aroused from his sleep to kiss his wife of 68 years Peggy (nee Todd).
Arnold’s love for his family was most important to him and he was a fine role model. He was born March 19, 1927 in Worcester, Mass. to Charles Arnold Meisner Sr. and Florence Grace (nee Powers). Arnold was only 9 days old when his father died and his mother returned home with him to New Germany to a sometimes difficult life. Arnold worked for Mersey Paper Co Ltd.(Bowater) for 41 years beginning at age 17 working in the woods as a scaler. With only grade ten education , Arnold was tasked with developing the lumber business for Mersey in Nova Scotia. He went on to spearhead the building of, and then manage the Bowater Sawmill at Oakhill, where he developed overseas lumber markets and loaded ships in Bridgewater destined for the UK.  After retiring from Bowater, Arnold spent 12 years operating Eacan Timber Ltd., a successful lumber sales company he founded with his son, Brad who continues to run the business today, celebrating its 35th anniversary this year. He served as the chairman of the board of the Maritime Lumber Bureau for the term1967/68 and was honored as the Bureau’s Lumberman Of  The Year award in 1986 and again in 1999.  In Liverpool , Arnold was active in Kinsmen, K-40, Curling, Masonic Lodge, Liverpool Baptist Church, the Progressive Conservative Party and also served as Liverpool Town Councillor.  Arnold took great pride in building his home and cottage and enjoyed the art of woodworking. In October 2014, Arnold and Peggy moved to Parkland Retirement Home in Truro to be near their children and appreciated the special care and attention they received. In his final days as a patient in the Palliative Care Unit at Colchester East Hants Hospital, he received exceptional and compassionate care from his doctors and nurses.
He is fondly remembered by his daughter Linda (Ross) Hall, and son Brad (Louanne) Meisner; grandchildren Craig Hall, Krista Clair, Evan Meisner, and Jessie Meisner; great grandchildren Colin, Caiden, Liam, and Kierra; sisters-in-law Mary Lou Marshall, Verna Bishop and Donna (Bud) Wefer.
Cremation has taken place under the direction of Chandlers’ Funeral Home, Liverpool. Visitation will be Sunday, June 7th, 2015, from 7:00 – 9:00 p.m. with a Masonic service at 7:00 p.m., both in Chandlers’ Funeral Chapel. Funeral service will be Monday, June 8, 2015 at 2;00 p.m. from Liverpool United Baptist Church with Reverend Dr. Steven Hopper officiating. A reception will be held in the church vestry immediately following the service. A private family burial will take place at a later date. Family flowers only, donations may be made to the Liverpool United Baptist Church or a charity of your choice. Online condolences may be made to www.chandlersfuneral.com.

Offer Condolence for the family of Meisner; Charles “Arnold”