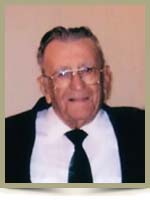 Medicraft- John Warren, 90, of Liverpool, Queens County, passed away peacefully on Tuesday, November 11, 2014, in Queens General Hospital, Liverpool. Born in Gull Island, Queens County, he was a son of the late Austin and Mary (Hicks) Medicraft. He was a loving husband, father and friend. John was a self employed owner/operator of Medicraft’s Oil Delivery and Furnace Repair, for thirty plus years. John also operated his own bicycle shop with his son Richard and a T.V. repair shop. John’s true passions were square dancing and wood carving. He was a very giving man and was thankful for everything the Lord had provided for him and his family. John was very dedicated to his church and his community. He is survived by his loving wife of 67 years, Marcella; daughter, Rebecca, of Dartmouth; son, Richard (Gloria), of Milton. He was predeceased by a sister Mabel Norman. Visitation will be held on Friday, November 14th, 2014, from 7:00 – 9:00 P.M., at Chandlers’ Funeral Home, Liverpool. A celebration of John’s life will be held on Saturday, November 15th, 2014, at 11:00 A.M., from Zion United Church, Liverpool. Lay Minister Peter Anthony officiating. Burial will be in Zion United Church, Cemetery, Payzant Street, Liverpool. Family flowers only. Donations may be made to a charity of your choice. Online condolences may be made to the family at www.chandlersfuneral.com

Offer Condolence for the family of Medicraft; John Warren