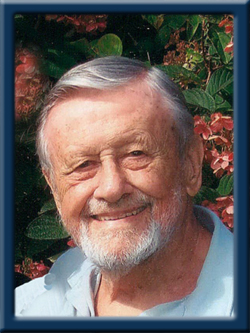 McMASTER – James “Jim” Brenton, 94, of Liverpool, NS, formerly of Winnipeg, MB. passed away peacefully with family by his side on Monday, May 27, 2019 at Queens General Hospital.
Jim was born April 27, 1925 in Chatham, New Brunswick. Jim was predeceased by his parents James and Evelyn (Smith) McMaster and his sisters Grace McMaster and Marion Paine (McMaster).
Jim is survived by Bryan, Laurice, Lauren and Kathleen Gerber of Winnipeg, MB.
Jim served as a machinist on the Corvettes in the Navy. He was the Broker / Owner of Reyner Realty and Woodstock Homes in Winnipeg. He was a 25 year member of the Canadian Real Estate Association. Jim was the President and General Manager of the Wildewood Club in Winnipeg. He was the President of the Manitoba Water Ski Association. He was a life member of the Royal Kennebecasis Yacht Club in St. John, New Brunswick. Jim was an avid outdoorsman spending time at the cottage in Manitoba fishing and sailing. He travelled to the Yukon, Alaska and Florida. He loved recanting “The shooting of Dan McGrew”.
The family would like to express their sincere thanks to Dr. Amy McMullin and staff of the 2nd floor Medical Unit at Queens General Hospital for their compassionate care given to Jim.
Cremation has taken place under the direction of Chandlers’ Funeral Home, Liverpool. At Jim’s request, there will be no funeral service. In lieu of flowers, donations may be made to the Canadian Cancer Society (Manitoba Division). Online condolences may be made to www.chandlersfuneral.com

Offer Condolence for the family of McMaster; James “Jim” Brenton