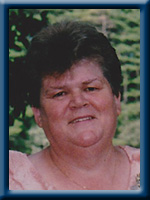 McLeod – Sharon Kathleen, 62, of Toronto, Ontario passed away peacefully on October 9, 2011 in Toronto.
Born on April 17, 1949 in Liverpool, she was the daughter of Shirley and the late Clarence MacLeod.
She very much enjoyed spending time with her family and friends as well as bingo and playing games on her computer.
She is survived by her children, Lawrence (Dale), Fort McMurray, AB; Patrick (Shana), Toronto, ON; Wendall (Jody Bezanson); Tabitha (Stephen Jollimore); both of Liverpool and Michael (Ruby) Rafuse, Kelowna, BC; sisters Karon, Montreal, QC, Pam (Mike Hupman), Lillian (Vincent) Lowe, Linda (Dennis) Jollimore; all of Liverpool, Pat (Charles) McOnie, Halifax, NS; brothers Arthur, Morris (Ginny), Wayne (Debbie) all of Liverpool, Michael of Dartmouth; grandchildren Morgan, Patrick, Tyler, Robbie, Thor, Hayden, Keira, Matthew and Raven; as well as many nieces and nephews. She is also survived by her long time companion Sidney Meisner of Toronto.
She was predeceased by a brother Paul, two infant brothers and step-parents Madge and Sandy McLeod.
Cremation has taken place under the direction of Ward Funeral Home, Toronto. Committal will take place at a later date in Trinity Anglican Cemetery, Liverpool. No flowers.

Offer Condolence for the family of McLeod; Sharon Kathleen