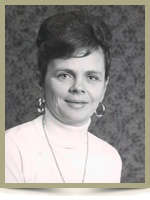 Born in Bridgewater she is the daughter of Gwendolyn “Girlie” (Levy) Wolfe and the late Stanley Wolfe.

Gwen helped form the Brooklyn Brownie corps, where she was a leader for a number of years, before becoming a leader with the Brooklyn Girl Guides. She worked many jobs in retail over the years before going to work at the Brooklyn Post Office. She had many hobbies that she enjoyed, such as knitting, rug hooking, ceramics and shopping. She enjoyed traveling with her family to the power boat races they competed in throughout Eastern Canada and the United States and driving to Florida with Reg for winter vacations.

A Graveside Funeral Service will be held Monday, August 22nd, 2011, at 2:30 p.m., from Seaside Community Cemetery, Brooklyn. Reverend Steven Hopper officiating. Family flowers only. Donations may be made to the Canadian Arthritis Society or to a charity of your choice. Online condolences may be made to the family at www.chandlersfuneral.com

Offer Condolence for the family of McLeod; Gwendolyn Helen