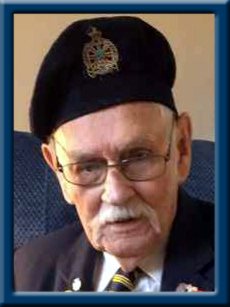 McLean; Robert Wm., 95, of North Brookfield, Queens County, passed away peacefully in North Queens Nursing Home, Caledonia on Friday, March 20, 2020.
Born in North Brookfield, Robert was a son of the late William and Maude (Freeman) McLean.
Robert served in the Second World War with the Military Police. Following the war, he returned home where he ran his own farm, worked in the woods and ran heavy equipment. He was a member of Mersey Branch #38, Royal Canadian Legion, Liverpool and a former member of A.L.Patterson Branch, #87, Caledonia.
He is survived by his sons Jim McLean (Katrina Ross) and Bobby (Christine) McLean, both of North Brookfield and Donald (Nadine) McLean of London, ON. Grandchildren Billy McLean, Thomas (Melissa) McLean, Christopher McLean, Isobelle McLean, Shayna and Benjie Ross. Great grandchildren Gibson McLean, Bentley and Greyson Ross. His sister Elizabeth (Charles) Richardson of Brooklyn.
Besides his parents, Robert was predeceased by his beloved wife Barbara and his half brother Harry Farncombe.
Cremation has taken place under the direction of Chandlers’ Funeral Home, Liverpool. A graveside memorial service will be held on Tuesday, September 15, 2020 at 11:00 a.m. in Rosette Cemetery. Pastor Douglas Mailman officiating. No flowers by request, donations may be made to a charity of your choice. Online condolences may be made to www.chandlersfuneral.com.
Robert’s family would like to thank the staff of North Queens Nursing Home for their excellent and compassionate care shown to Robert during his stay.
Due to the ongoing COVID-19 pandemic, those attending this service are asked to bring their own mask, practice social distancing when possible and provide the funeral staff with contact information.

To see a recording of Robert’s funeral service, please click this link.

Offer Condolence for the family of McLean; Robert William