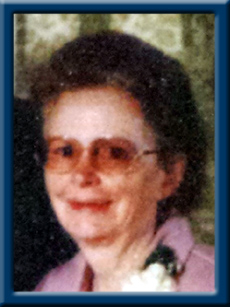 McLEAN – Barbara Anne, 84, of North Brookfield, Queens County, passed away peacefully in North Queens Nursing Home, Caledonia on Thursday, January 5, 2017 with her loving husband by her side.
Born in North Brookfield on September 23, 1932, she was a daughter of the late William Baker and Mary (Smith) (Baker) Whynot.
Barbara was a former school teacher in her younger years. She loved the outdoors and music and served as church organist at the North Brookfield United Baptist Church for many years where she was also a member and Sunday School teacher.
She is survived by her husband of over 60 years, Robert; her sons James (Katrina Ross) of West Caledonia; Robert (Christine) of North Brookfield and Donald (Nadine) of London, ON. Grandchildren Billy (Amanda) McLean, Thomas “TJ” McLean, Craig McLean, Isobel McLean, Benjie Ross and Shayna Ross and great grandson Bentley Ross. Her sister Marilyn Baker of Dartmouth.
Cremation has taken place under the direction of Chandlers’ Funeral Home, Liverpool. A graveside memorial service will be held Thursday, April 13, 2017 at 2:00 P.M. in Rosette Cemetery, North Brookfield. No flowers by request, donations may be made to North Queens Nursing Home, Caledonia or to North Brookfield United Baptist Church. Online condolences may be made to www.chandlersfuneral.com

Offer Condolence for the family of McLean; Barbara Anne