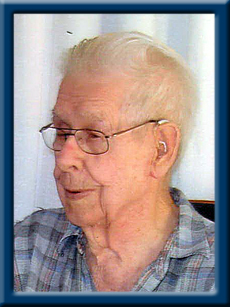 McKinnon – Wm. Smith, 95, of Charleston, Queens County, passed away peacefully in the Veteran’s Unit of Fishermen’s Memorial Hospital, Lunenburg on Tuesday, December 26, 2017.
Born in Charleston, Smith was a son of the late Laurie and Alwilda (Greenlaw) McKinnon.
Smith was a veteran of World War II serving with the Royal Canadian Army Corps overseas in England, Germany, Holland and Belgium. Following the war, Smith returned to Canada and worked in Dartmouth at Liquid Carbonic making dry ice and later worked as a welder for Steel and Engine Products Limited (STENPRO) in Liverpool for over twenty years until his retirement. In his spare time, Smith enjoyed gardening, salmon fishing, hunting, snaring rabbits and especially trout fishing with his grandson Travis.
Smith is survived by his only daughter Anna-Stell (Jordan) Vaughn of Charleston; his grandson Travis (Angela) Vaughn and his great grandsons Leyton and Hanley.
Besides his parents, Smith was predeceased by his wife Irene (Rafuse) and his brother Harry.
Funeral service will be Saturday, December 30, 2017 at 11:00 a.m. in Chandlers’ Funeral Chapel, Liverpool. Reception to follow. Burial will be in New Charleston Cemetery. Family flowers only, donations may be made to the Queens General Hospital Foundation or to a charity of your choice. Online condolences may be made to www.chandlersfuneral.com

Offer Condolence for the family of McKinnon; William Smith