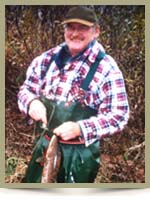 Born in Mill Village, he was a son of the late Parker and Mae (Hirtle) McKinnon.

Dennis was a former employee with the Clothing Department of Bowater Mersey Paper Company for 38 years until his retirement. He enjoyed hunting and fishing as well as sports such as bowling, golf, curling and baseball.

He is survived by his wife, the former Marilyn Allen; his daughters Denise (Douglas) Fawthrop of Halifax and Laurel (Edwin Gauthier) of Oshawa, Ont. His son Timothy (Rebecca) of Eagle Head. seven grandchildren and eight great- grandchildren. His brothers Irving (Vida) of Port Medway, Donald of Halifax and Eugene  of Ontario.

He was predeceased by his sisters Kathleen, Hilda, Ruth, Doris and Gloria and his brothers Frank, Max and Earl.

Cremation has taken place under the direction of Chandlers’ Funeral Home, Liverpool. Funeral service will be held Thursday, October 25th, 2012 at 2:00 p.m. in Trinity Anglican Church, Liverpool. Chaplain Donald Lawton officiating. No flowers by request. Donations may be made to Queens Manor, Liverpool or to the Medway Salmon Association. Online condolences may be made to www.chandlersfuneral.com

Offer Condolence for the family of McKinnon; Dennis Gordon