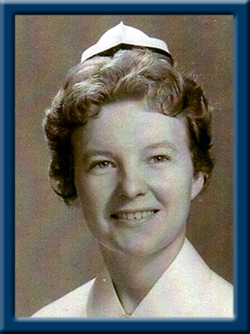 McINTOSH – Constance Marie, 74, of Caledonia and Toronto, ON. It is with a heavy heart that I bring news of the passing of my beloved wife, Connie. Connie left us peacefully in my grateful arms and surrounded by her family on August 7, 2016 in Queens General Hospital, Liverpool, NS after a battle with cancer. Connie had a heart so big and a soul so sweet as to make the heavens ache.
Connie was born in Maitland Bridge, NS in 1942, a daughter of the late Isabel (Ford) Lohnes. She grew up with all the rural beauty this province has to offer. After high school, she entered nursing training at the Victoria General Hospital in Halifax and graduated as an R.N. in August 1963. A born nurse, Con spent the better part of her life tending to the sick and elderly. We met, fell in love and were married in 1964 while I was based at RCAF Greenwood. A nurse and a flyboy, apple pie and cheese. We leapt off the matrimonial (as Con put it) and entered upon a wondrous 52 year adventure together. Con gave meaning to my existence and now it all seems like a blink of an eye.
Along with husband Bill, Connie is survived by her sister Sandra Carver and her husband Robbie, her brother Paul Lohnes and his wife Edie, her sister in law Peggy Kelly and sister in law Janet Stoddart and her husband Bill and brother in law David McIntosh and his wife Jean as well as many nieces and nephews.
Arrangements are under the direction of Chandlers’ Funeral Home, Liverpool, NS. A celebration of Connie’s life will take place Sunday, October 2, 2016 at 2:30 p.m. in Maitland Bridge Community Hall with a reception to follow. A private family committal will take place at a later time. No flowers by request, donations may be made to a charity of your choice. To share memories and condolences, please visit www.chandlersfuneral.com.
“My heart breaks to say farewell to you, bebe, you were the light of my life. I’ll look for the extra twinkle in the night sky and know it’s your kiss goodbye.”

Offer Condolence for the family of McIntosh; Constance Marie