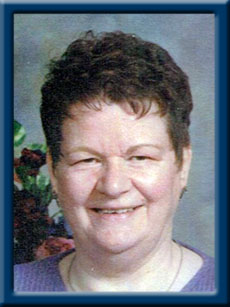 McGRATH – Marion Edith, 79, of Port Mouton, Queens County, formerly of Prince Rupert, BC, passed away peacefully in Queens General Hospital, Liverpool on Tuesday, October 24, 2017.
Born in Prince Rupert, she was a daughter of the late Edward and Elizabeth (Scott) Evans.
Marion worked as a bookkeeper and in home care as well as a dietary aide worker at a hospital.
She is survived by her daughter Barbara (Ron) Campbell of Port Mouton; her son Ivan of Nanaimo, BC; her grandchildren Krista Langille, Andrew Langille, Edward Langille, Darlene Langille and her son James Langille, Marion’s great grandson. Her daughter in law Tanis Langille of Prince Rupert, BC
She was predeceased by her first husband St. Clair Langille, her second husband William McGrath, her son David Langille, her sisters Dorothy Ackerman and Lucy Franklin.
Cremation has taken place under the direction of Chandlers’ Funeral Home, Liverpool. At Marion’s request, there will be no funeral service. No flowers. Donations may be made to the West Queens First Responders, the Alzheimer’s Society of Nova Scotia or the Mental Health Association of Nova Scotia. Online condolences may be made to www.chandlersfuneral.com

Offer Condolence for the family of McGrath; Marion Edith