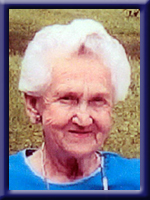 McGINTY – R. Janet, 88, of Caledonia, Queens County, passed away peacefully in North Queens Nursing Home, Caledonia.
Born December 26, 1925, in West Caledonia, Queens County, she was a daughter of the late Thomas and Bella (Boyle) McGinty.
Janet was a graduate of Mount Saint Vincent University with a business related degree. She worked for the Caledonia Co-op and Children’s Aid Society in Liverpool before moving on to Rafuse Equipment where she worked until she was needed at home to care for her parents. She was an active member of St. Jerome’s Catholic Church, West Caledonia and a member of the Catholic Women’s League. Janet was also a volunteer on the North Queens Nursing Home Board. She enjoyed all types of card games, especially bridge, however she did not “suffer poor players well”.
She is survived by nieces and nephews and their children and many cousins. She will be especially missed by Marilyn and Chuck and their families.
She was predeceased by her brothers Clarence, Lester and Edward.
Cremation has taken place under the direction of Chandlers’ Funeral Home, Liverpool. Funeral service will be held at a later date. Family flowers only, donations may be made to St. Jerome’s Catholic Church or to the North Queens Fire Association. Online condolences may be made to www.chandlersfuneral.com

Offer Condolence for the family of McGinty; Rose Janet