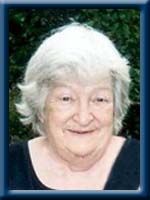 Formerly of Saint John, N.B. , she was the daughter of the late James Andrew and Mary Alice (Martin) Grey.

Frances had resided at Queens Manor for several years and was an active member of St. Gregory’s Catholic Church.

She is survived by her daughter Mary Alice Lecour (Wade) of Brampton, ON; son Ken McGinnis (Ann) of Liverpool, N.S.; sister Dolly (Gray) Jones of Oshawa, Ont.  8 grandchildren, 5 great-grandchildren, many nieces and nephews.

She was predeceased by her daughter  Bridgette, son John; 9 brothers and 3 sisters.

Cremation has taken place under the direction of Chandlers’ Funeral Home, Liverpool. There will be no visitation or funeral service by request. Donations in Frances’ name may be made to the Canadian Cancer Society, Queens County Special Olympics, Queens Manor or the Queens General Hospital Foundation. Online condolences may be made to www.chandlersfuneral.com

Offer Condolence for the family of McGinnis; Frances Joan