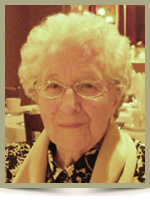 Survived by her loving husband of 65 years, James;  sons  Frederick  (Fernand) of Bathurst, William (Lynnette) of White Rock BC, and Mo (Norman) of Newcastle, Maine; grandchildren Dustin, Katie, Malcolm, Jordan and Ranger; and great-grand-daughter Macy.  Grace  has  one surviving cousin, Barbara, and numerous nieces and nephews. Born at home in Liverpool on March 4, 1923, Grace was a daughter of the late Fred and Jessie (Feener) Stafford.  She has one surviving sibling, Merrill (Elsie) of Bridgewater. Grace was predeceased by her daughter Carolyn in 1965.

Grace was a devoted mother to her family. Her faith in God was strong.  Grace  led a full life of travel, music (she played piano by ear) and celebrating  life with family and friends. She will be missed by many.

Funeral arrangements have been placed in the care of Chandlers’ Funeral Home, Liverpool. Visitation will be at Chandlers’ Funeral Home from 7:00 to 9:00 pm on Sunday, July 7th.  Funeral Mass will be celebrated on Monday, July  8th, 2013 at 11:00 am at St. Gregory’s  Catholic Church in Liverpool, NS. Condolences may be made by a donation to the charity of one’s choice. Online condolences to the family may be made at www.chandlersfuneral.com

Offer Condolence for the family of McAvoy, Grace Ellen