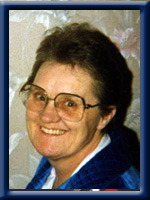 MAYO – Thelma M., 69, of East Port l’Herbert, Queens Co., passed away peacefully in Queens General Hospital, Liverpool on Saturday, April 16th, 2011.
Born in Tuft’s Cove, she was a daughter of the late Stanley and Edith (Gardner) Himmelman.
Thelma was a devoted mother and grandmother who enjoyed watching television especially “The Price is Right” and “Dancing With The Stars”. One could never leave her home without a hug and a kiss from her. She will be sadly missed but fondly remembered by all her family and those who had the pleasure of meeting and knowing her..
She is survived by her daughters: Edith (Harland) Robart, Beatrice Mayo (Aubrey Bryant) and Frances Mayo, all of East Port l’Hebert; her son Larry (Mabel) of East Green Harbour. Her grandchildren Sally (Troy) Wolfe; Lindsey, Charley, Jobe, Alan, Emily and Allan. Great grandchildren Nathan, Dayton and Hayden. Her sisters: Doris (Al) Labour, and Mary (Blandford) Nickerson both of East Port l’Herbert. Cecilia (Alfred) Jones and Rose (Gene) Stewart both of Lockeport. Her brothers: Gary; St. Clair (Marlene), James (Jennie), Ernest (Barbara), Earl (Connie), Roy (Mollie), of East Port l’Herbert.
She was predeceased by her husbands Lawrence “Shorty” and Wendell Daury, son George, Grandson Ricky and sister Pearl.
Visitation will be Tuesday, April 19th, 2011 from 7 until 9 p.m. and funeral service will be held Wednesday, April 20th, 2011 at 11:00a.m. both in Chandlers’ Funeral Chapel, Liverpool. Burial will be in Osborne Cemetery, Osborne Harbour. No flowers by request. Donations may be made to the Heart and Stroke Foundation of Nova Scotia, the Canadian Cancer Society or Queens Home Support. Online condolences may be made to www.chandlersfuneral.com

Offer Condolence for the family of Mayo – Thelma Martina