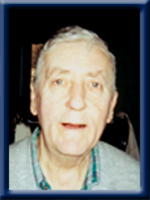 May; George Patrick , 74, of Dayspring, formerly of Port Mouton, passed away peacefully on Wednesday, February 19, 2014, in LaHave Manor, Dayspring.

Born in Liverpool, he was a son of the late George “Patrick” and Annie “Vivian” (Smith) May.

George was happiest when spending time with his nieces and nephews.

He was well known for his ability to produce detailed miniature lobster traps and for his love of country and western music. He worked aboard many coast guard ships during his younger days.

He is survived by his brother Herman (Olia); nieces Patricia, Erin, Maggie; nephews Mike and Patrick.

A graveside memorial service will be held on Saturday, February 22nd, 2014, at 2:00 p.m., from Peaceful Hill Cemetery, Port Mouton. Reverend Karen Ohrt officiating. Family flowers only. Donations may be made to the LaHave Manor. Online condolences may be made to the family at www.chandlersfuneral.com

Offer Condolence for the family of May; George Patrick