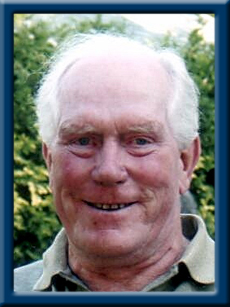 Martyn, Philip Gerald – It is with deep sadness that we announce the peaceful passing on May 1 of Gerry Martyn, age 87, of Cherry Hill, N.S.
Gerry will be greatly missed by his loving wife, Faye, and his children, son John (Debbie) of Gloucester, Ontario, daughters Gail (Phil) Downey and Valerie Brousseau (Jim Holly) of Ottawa; grandchildren Sarah, Kris, Kate, Dave, and Bryan of the Ottawa area; and great-grandchildren Breanna, Wyatt, Quinn and Eloise. Gerry also leaves behind his first wife and the mother of his children, Dorothy Martyn of Ottawa.
Gerry was born in Preston, England and attended Oriel House Preparatory School in St. Asaph, Wales and Denston College, Staffordshire, England. He excelled in athletics at school, playing all sports but was particularly talented in boxing and rugby. He maintained this love of sports throughout his life. Following his schooling, Gerry joined the Lancashire Fusiliers Regiment of the British Army, and served for five years.
In the mid-1950s, Gerry immigrated to Canada with his family and shortly thereafter, joined the Canadian Army. Initially he was a member of an airborne infantry regiment before being transferred to the Canadian Intelligence Corps two years later. Gerry served with the Intelligence Corps until his retirement in 1976. After his military service, he spent ten years with the Canadian Customs Intelligence Unit.
In the mid-1990s, Gerry and his wife Faye, moved to Nova Scotia to be near the ocean. They found their piece of heaven in Cherry Hill, Lunenburg County where they forged new friendships and shared many, many fond memories. Gerry loved golf and was a founding member of the Osprey Ridge Golf Club. He additionally enjoyed playing at the Liverpool Golf and Country Club, also known as “the Pebble Beach of the north”.
Gerry was an avid reader, especially history. He was a strong supporter of the South Shore Regional Library bookmobile service. Gerry had a special bond with dogs, especially German short-haired pointers, and enjoyed their companionship. He will be sorely missed by Tawney. Gerry was a man of stature and strong presence. He also had a gentle softer side. He had many stories to tell, especially over a wee dram (or maybe two) of Irish whiskey. He was a receptive listener as well.
He was very proud of his children, his grand-children and great grand-children. To all of us who knew him, Gerry’s memory will live on forever.
Cremation has taken place under the direction of Chandlers’ Funeral Home, Liverpool. At Gerry’s request, there will be no funeral service. Memorial donations may be made to the Canadian Cancer Society, Palliative Care, the S.P.C.A and/or a charity of your choice. Online condolences may be made to www.chandlersfuneral.com
“Do not stand at my grave and weep,
I am not there I do not sleep,
I am a thousand winds that blow,
I am the diamond that glints on snow,
I am the sunlight on ripened grain,
I am the gentle autumn’s rain;
When you awaken in the morning’s hush,
I am the swift uplifting rush,
Of quiet birds in circled flight,
I am the soft stars that shine at night.
Do not stand at my grave and cry – I am not there, I did not die.”

Offer Condolence for the family of Martyn; Philip Gerald