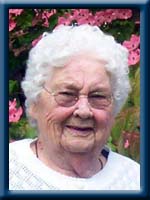 Born in Halifax, she was a daughter of the late James and Alma (Redmond) Woods

Nellie was a member of the Church of Jesus Christ of Latter Day Saints and enjoyed knitting, cooking and baking for her family.

She was predeceased by her husband Lawrence , her son Roger, her siblings James, Charles. Myrtle and Charles,

Visitation will be Saturday, February 2nd, 2013 from 7 until 9 p.m. and funeral service will be Sunday, February 3rd, 2013 at 2:30 p.m. both in Chandlers’ Funeral Chapel, Liverpool. Bishop Ryan Fraser officiating. Burial will be in Zion United Cemetery, Payzant Street, Liverpool. Family flowers only, donations may be made to any charity. Online condolences may be made to www.chandlersfuneral.com

Offer Condolence for the family of Martin; Nellie Mae