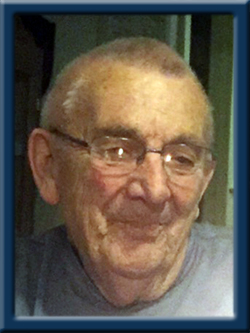 Martin – Lester Frank, 87 of Middlefield, passed away peacefully on Sunday June 17, 2018, in Queens General Hospital, Liverpool.
Born in South Brookfield, Queens County, he was the son of the late Maxwell and Sarah (Holloway) Martin.
Lester started his working career working in the woods cutting firewood. He did the river run in Kapuskasing clearing log jams, worked for Ontario Northland Railroad installing telegram cables and helped build the road from Liverpool to Caledonia. By the age of 21, Lester was enlisted in the Royal Canadian Air Force and was trained at Camp Borden in Ontario as an aero engine technician and later as an instructor. He served on the crash crew in Lahr, Germany and did patrol across the Atlantic Ocean in the Argus. He retired from the air force with the rank of Master Warrant Officer in 1977 after 26 years service. At the time of his retirement, Lester was superintendent of the Engine Bay at CFB Greenwood. After his retirement, Lester took up upholstery repair and worked for Smith Furniture and Appliances for a time until he started his own business; Martin’s Upholstery in Liverpool along with his wife Norma. They ran the business for 23 years. Lester will be remembered as a gentle, soft spoken man who always put others first. He was very community minded and was instrumental in getting grants to fix the community church and cemetery which went on to win the Rural Beautification Award.
He is survived by sons, Laurie (Anne), of Bridgewater; Steven (Brenda), of Pleasantfield; grandchildren Alicia, Alex, Ryan and Sarah and great grandchildren Christopher, Georgia and Owen. His brothers Eugene of Kingston and Francis (Theresa) of Ontario.
He was predeceased by his loving wife, Norma; his sister Mildred Lyttle and his brothers Maxwell and George.
Cremation has taken place under the direction of Chandlers’ Funeral Home, Liverpool. A private family service will be held at a later date. No flowers, donations may be made to heart and Stroke Foundation of Nova Scotia. To share memories or condolences, please visit www.chandlersfuneral.com

Offer Condolence for the family of Martin; Lester Frank