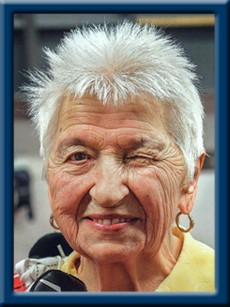 Frieda Helene Marson (nee Bey) Mill Village, NS
Born 18 January, 1923.  Died peacefully at North Queens Nursing Home, Caledonia, on 7th of April, 2018, bringing to an end her incredible journey of 95 years.
Born in East Prussia near Konigsberg, her farmer parents Gustav and Johanna Bey fled with their children from the advancing Russian army during WW2.  She later met and married her husband, Cyril John Marson, a member of the liberating British army. In 1947 she moved as a war bride to London, England, and later to Potter’s Bar where they raised two daughters, Joan Dorothea (Walford) and Margaret Elizabeth (Swain).  After losing her beloved Cyril in 2002, she moved to Mill Village, Nova Scotia, to live with her loving daughter Margaret and son in law Bernard Swain.
Frieda was a devoted wife, mother, grandmother and great grandmother who loved to play bridge and travel.  Her travels took her across Canada, the USA, and as far afield as South America and Australia. Having held three citizenships throughout her 95 years, she ended as a proud Canadian.  Throughout her life she bravely met many adversities.
She was loved and will be missed by her friends and family, including her two children, 4 grandchildren (Christopher, Matthew (Jo), Gary and Mandy, and great grandchildren Summer, Jack, Brandon, Memphis, Kevin and Mae Lynn.
Cremation has taken place under the direction of Chandlers’ Funeral Home, Liverpool. No visitation. Funeral Service will be held Saturday, April 21, 2018 at 11:00 a.m. in Chandlers’ Funeral Chapel, Liverpool. Reception to follow.
In lieu of flowers, donations may be made to Queens General Hospital, Liverpool, or North Queens Nursing Home, Caledonia. We thank the staff of North Queens Nursing Home for their incredible care and compassion. Online condolences at www.chandlersfuneral.com

Offer Condolence for the family of Marson; Frieda Helene