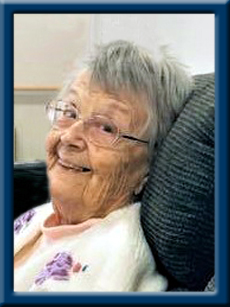 Jean Mansfield Funeral Service Live Stream
Mansfield, Jean Winnifred, age 96, of Milton, passed away peacefully at Queens Manor, Liverpool on Wednesday, January 19, 2022.
Born in Summerville Centre, Jean was the eldest of the seven children of the late Aubreyand Mildred (Davis) Hupman.
Jean began her education at the one room schoolhouse in Summerville, and graduating head of her class with her Grade 12 certificate from Liverpool Academy, Class of ’43.
Although she would have called herself primarily a homemaker, Jean held a variety of jobs, including a brief stint as a supply teacher, as a waitress at White Point Lodge in her early years, clerk at Dexter’s Store in Liverpool, and as assistant postmistress at the Milton Post Office until her retirement.
Jean and her husband Roy, along with their three children, enjoyed many camping and travel adventures over the years, and in their retirement years, venturing farther afield, with at least two trips across Canada, and to Alaska, a bus tour of Great Britain, and a couple of Wartime Reunions in Holland.
Jean, and Roy, were active in square dancing for many years, with the Jolly Roger Squares, and also league bowling. Jean was active in Milton Christian Church, particularly with the Christian Womens Fellowship. Jean’s greatest love was always her family, maintaining close contact with all of her siblings, and a large cohort of cousins, through Summerville suppers, church functions, and times at the family cottage near the sea.
Jean is survived by son Chris (Cheryl), daughter Diane (Wayne) Wentzell, son Jamie (Mary Keough), all of Milton, grandchildren Tania Randall, Tim Wentzell, Kim Wentzell, and Andrew Mansfield (Kerra Aucoin) of Dartmouth, step grandchildren Adam MacDonald (Kerri-Ann), Tyler (Tanya) MacDonald and Marianne MacDonald, four great-grandchildren, sister Audrey Wagner of Summerville and brother in law Mack Robinson of Belleville, Ontario, numerous nieces and nephews.
Jean was predeceased by her parents, her brothers Clair and Vernon Hupman, her sisters Amy Lawson, Grace Robinson and Betty Trimm.
Funeral service will be held Wednesday, January 26, 2022 at 11:00 a.m. in Chandlers’ Funeral Chapel, Liverpool. Reverend Russell Prime officiating. Burial will be in Milton Community Cemetery. No flowers by request. Donations may be made to Queens Manor or Queens General Hospital. Online condolences may be made to www.chandlersfuneral.com.
Live streaming of Jean’s service will be available at service time on Wednesday. Those planning to attend Jean’s service are asked to bring a mask, practice social distancing whenever possible, hand sanitize and provide funeral staff with proof of vaccination, identification and contact tracing information.

Offer Condolence for the family of Mansfield; Jean Winnifred