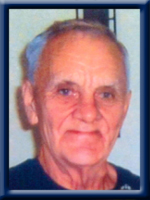 MANSFIELD –  Francis P. “Ted”  71, of Liverpool, passed away peacefully in Queens General Hospital on Saturday, October 26, 2013 surrounded by his family.

Born in Caledonia, he was a son of the late  Francis Pearl Sr. and Marion (Muise) Mansfield and stepson of Mildred Mansfield of Caledonia.

Ted was a scallop fisherman for thirty years. He was a painter  and took great pride in his work. He was a member of Queens Archers and enjoyed bow hunting. He was a member of the Liverpool United Baptist Church and served as janitor for 15 years. The love of Ted’s life was, above all, his family. He could be counted on to help when help was needed.

He will be sadly missed by his wife of 52 years, Gladys (Spinney) his sons John (Isaura) of Milton, Richard (Jackie) and Daniel , both of Liverpool. 10 grandchildren and 10 great grandchildren, sister Linda (Doug) Lucier of Liverpool, brothers George (Shirley) Mansfield of Milton, Gerald (Roberta) Wortman of Caledonia.

He was predeceased by a sister Pat and brother Glen.

Offer Condolence for the family of Mansfield; Francis Pearl “Ted”