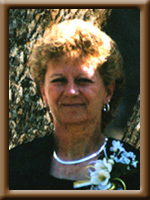 God received a beautiful angel Saturday, April 17, 2010. At the break of dawn, graced with her loving family by her side, at home, Yvonne Caroline Mansfield-Cunningham, 54 of Westfield embraced her new journey.

Born February 9th, 1956, daughter of the late Theodore Weare and Avis (Canning) Weare. Yvonne endured great happiness in being outside, enjoying the beauties of nature, whether it be camping in Hibernia, watching Frisko and Vibe, enjoying an ATV ride, adoring her gardens or having a BBQ with family and friends.

Yvonne was an employee of North Queens Nursing Home, Caledonia until her retirement after giving 35 dedicated years as a PCW, building a wonderful web of friends. Yvonne was admired as a quiet, strong, remarkably courageous woman. Yvonne had many challenges embark on her throughout her life, but she was able to meet them with her sheer determination. Family was an important part of Yvonne’s life.

Visitation will be held Monday, April 19th, 2010 from 7:00 until 9:00 p.m from Chandlers’ Funeral Home, Liverpool. A funeral service will be held Tuesday, April 20th, from Westfield United Baptist Church at 2:00 p.m. Reverend Lloyd Gillieo officiating. Burial will take place at Hill Crest Cemetery, Westfield. Family flowers only. Donations may be made to South Shore Health Palliative Care or to the Canadian Cancer Society. Online condolences may be made at www.chandlersfuneral.com

Offer Condolence for the family of Mansfield-Cunningham; Yvonne Caroline